I have always had a love for outer-space.  As a kid I remember my Mom waking my brother Dave and I up to watch the first moon landing on her black and white TV.  I was captivated as a young child with the exploration of the moon.  In the early 70's I remember watching the astronauts hopping around on the moon and I used to love to read about the Space Race, and how America came from behind to beat the Soviets in a race to land man on the Moon.  I really liked the idea of Space Mission Patches, and even tried to create a collection of them by hand-drawing them from pictures I would see of the Astronauts in National Geographic.

In 1980, my family was living in the UK, and we took a trip back to the states to visit family.  At the end of that month long trip we spent a week in Florida, and on my 14th birthday we went to Cape Kennedy Space Center.  It was an awesome day and it flew by way too fast.  We got to see the launch pads, a real Saturn V rocket, and toured some part of mission control.  It was one of my favorite birthdays as a kid, and it went by too quickly.  At the end of the day I my family bought for me all of the Apollo and Gemini mission patches, along with a Viking Lander patch and the first Space Shuttle mission patch (STS-1) - keep in mind that the shuttle had not yet flown.

My Mom, who loved to sew said that she thought it would be cool if we could put the patches on a "Space Quilt" and so we began to work on it.  The first thing that she did is to gather up all of my jeans with holes in the knees (I have always been tough on clothes), and cut them into patches.  We decide to design a quilt based on the sun and the 9 planets, with each planet having an orbit.  Mom arranged the denim material so that the lighter denim was closer to the sun and the denim darkened as you went further and further into space.

In 1981, Mom finished the quilt, and we sewed on the patches at that time.  I put the quilt on my bed and began to use it.  I have had that quilt since I was 15 and used it for the past (almost) 40 years.

In mid 2020, my Mom was super bored in Covid - Quarantine, and I asked her if she could patch up my quilt.  Time had not been kind to it, and I had used it for much of the intervening 40 years.  She took it on as one of her many quarantine projects and began texting me as her work progressed.

Her first step was to take a look at the old quilt.  Her initial assessment was "I've just finished cataloging all the work that needs to be done and I sorted thru my stash of cast off denim fabric and I think I have enough stone washed denim to replace the frayed patches in the top three rows. Saturn and Neptune have to be remade. Mercury, Mars and Jupiter need work but most of those planets are ok.  I'd forgotten what a huge project this was.  I believe  it was my first major quilt project.  It certainly has stood the test of time. I think I finished it for your 16th birthday.  I want to replace the sun fabric and I still think fleece is the best choice.  Perhaps a tie died print in yellow/orange would look good....  Time for that decision later."

First to be worked on was the Sun.  She sent this image and a text.  "Rediscovering the joy of applique.  The fun part is the final round of seeing all together - all those dark basting stitches are a pain".  Here are three views of the Sun, the original, the "In progress", and the Completed Sun.  It was also cool that Mom was able to include some material donated to her by my sister-in-law Joni, who passed away from cancer 2 years ago.

Next on the list for rework was the planet Mercury.  Mercury had actually been revised once before (after about 20 years of use).  Here are the three versions of the planet
"WHEW!!! I just finished the remake of Mercury and basted it in place and decided to baste down the patches.  I removed the top 3 rows of denim.  GASP, I couldn't find them!!  A frantic search ensured that stated with actually finding the top of the kitchen table, then the box of denim fabric scraps, even checked the trash AND the fabric stash upstairs...  The I remembered where I put them for 'safe keeping'.  They are safe and sound and soon to be re-attached."  I reminded Mom, "St. Anthony works for lost planets..."  She responded ":) :) :) he sure does!"
After Mercury, Mom went to work on Venus.  Fortunately she was able to find some cloth that almost perfectly mirrored the original Venus and so she went to work repairing the slightly frayed planet.  The results look quite good.  In the 1990's the Magellan spacecraft visited Venus and used Radar to take images of the surface of the planet.  I worked for the USGS as a student intern during my undergraduate days in the late 1980's and early 1990's.  Some of the guys in the USGS worked with NASA to help them process their Radar data to create surface maps off Venus - the color scheme is reminiscent of the Venus on my Space Quilt.
After completing Venus it was time to move onto Planet Earth.  The original earth had rather plain continents and my Mom wanted to improve on the look and topology so off to the fabric store she went to find something that would better capture the mountains, jungles, deserts and grasslands of Earth.  I like the results

Like Venus, the Red Planet, Mars was in pretty good shape.  Mom was able to make minor repairs before re-setting the planet.  In 1995 I was hired by Lockheed Martin to work on several spacecraft programs.  I helped to write software for the Space Technology Experiment (STEX), the Mars 98 lander (which crashed into Mars), and other vehicles.  When I first started with my team I worked with some of the guys who had written the payload software for the Viking I and Viking II landers, which I have as a patch on my Space Quilt.  Here is how Mars fared through the repair project.
Once Mars was repaired it was time to take on the outer planets.  Jupiter (which at the time the quilt was made did not (yet) have rings always had the Great Red Spot.

After Jupiter came Saturn.  I don't have the "Before Saturn" picture.  In December Mom finished Saturn 2.0 with the announcement "TA DA!!!  Drum roll please!  I finally finished Saturn, Neptune is next..." I really like how Saturn 2.0 looks.
The remaining gas giants, Uranus was ok, as Mom had patched it up when she patched up Mercury 2.0, however Neptune took some work to complete.  Mom is quite proud of being able to add swirls into the clouds on Neptune.
Finally, Pluto required a minimal amount of updating.  My Mom left it alone (for the most part), although Dad said that she should have put a heart on the little planet.  Pluto was only just visited in 2006, when New Horizons zipped by it.  When I was raising my younger two boys, they would hop on my bed and we could point to Pluto and say "When you are 12 a spaceship that was launched just after you were born will fly past that planet, and then we will know what it actually looks like...
About half-way through the quarantine project Mom asked me if I had any mission patches for the work that I do today at Lockheed Martin.  I still had an Apollo Soyuz patch (the last of the Apollo Missions) that never made it onto the original quilt, and I do some consulting with our Manned Spaceflight programs (Artemis and Orion), as well as a couple of other missions, so we added some patches for the new programs to the re-worked quilt.  The Space Quilt is fully refurbished, and it is a nice memento of both my childhood and some of the directions my own career has taken.  Thanks for a special gift of love Mom!
Posted by deacon paul No comments: 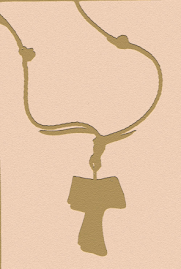 What's in a Name?

The name 'The Three Knots' refers to the the three knots that the Franciscans wear on their cinctures - these knots symbolize their vows of Chastity, Poverty and Obedience. These vows are sure guides in the spiritual life, especially in our modern world where lust, greed and noise are the hallmarks of our society.

While I am not a Franciscan, I am a brother of St. Francis of Assisi, because we are both Deacons in the Catholic Church. St. Francis was the first saint that I greatly admired, and through the witness of his life he led me into a deeper love for Jesus Christ.

And so, the name of this blog pays homage to that fiery Italian preacher from the 13th century whose life still witnesses to the truth of the Gospel.

deacon paul
Denver, Colorado, United States
"I have come that you might have life and have it abundantly!" - These words from the Gospel of John were brought to Denver by Pope John Paul II in 1993 for World Youth Day. Since that time I have been giving life my best shot. I have five kids (speak about abundant life!) - each one very different than the next, and the collection makes for quite a riot (especially when I ask them to clean their rooms). My full-time gig is being a Father, which I support through my work with Lockheed Martin where I help to build spacecraft software. I also minister as a Deacon for the Archdiocese of Denver for my Archbishop Samuel Aquila. He assigned me to St. Anthony of Padua Catholic Church here in West Denver Colorado.

We (Catholics) are celebrated the 2000th anniversary of the birth of St. Paul with a Holy Year in 2007-2008. To learn more about my patron I gave a series of monthly lectures on the life and writings of St. Paul. Links to the lectures are found below in PDF Format. Caution - some of these files are BIG!